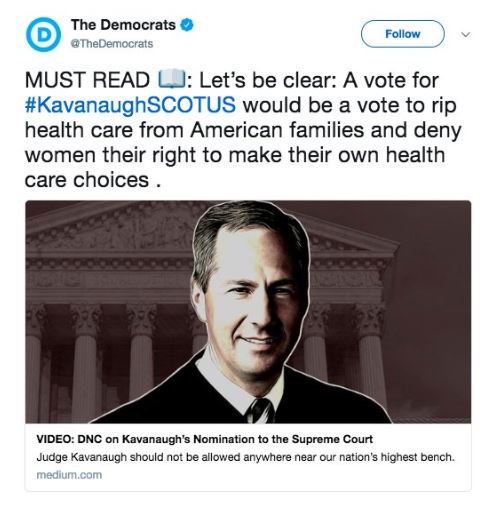 The official Twitter account for the Democratic Party tweeted an article blasting President Donald Trump’s Supreme Court nominee Judge Brett Kavanaugh that erroneously included a cover photo of Judge Thomas Hardiman, who was not nominated for the highest bench.

“MUST READ: Let’s be clear: A vote for #KavanaughSCOTUS would be a vote to rip health care from American families and deny women their right to make their own health care choices,” tweeted the Democratic Party’s account — along with the image of Hardiman.

After much mockery — including from GOP Senator Orrin Hatch — the Democratic Party’s account eventually deleted the post. Check out a few of the posts from Twitter personalities knocking the mishap below:

“Fill in the blank” opposition keeps getting people in trouble.

That’s not even Judge Kavanaugh. https://t.co/ep8vAzootd

Let’s be clear: the Democrats are so inept that they can’t even get their message straight because they can’t tell the difference between Judge Kavanaugh & Judge Hardiman. pic.twitter.com/bKDhOwTB35

His Twitter account was just making fun of Democrats for mixing up photos of Kavanaugh and Hardiman.. https://t.co/OH57YrFvA4

That is a picture of Hardiman, not Kavanaugh pic.twitter.com/IHhb0uhI2k