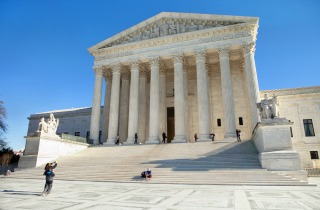 As a conservative, the toughest part about not supporting Donald Trump during the campaign was that there is open seat on the Supreme Court which eventually needs to be filled, presumably by the next president. This reality would always increase the stakes of an election, but this seat isn’t just any of the nine. It was the one which belonged to conservative icon Antonin Scalia and thus is, at least to conservatives, the most important on the court, taking on an almost sacred status.

The idea of Hillary Clinton replacing Scalia was so understandably repugnant to conservatives that it allowed Trump to literally get away with almost anything while not losing significant Republican support. Of all the many factors of the “perfect storm” which led to his razor-thin margin of victory, it is my view that the death of Scalia is by far the most underrated. I believe that if Scalia was still alive, irony of ironies, that Clinton would have won.

However, a large part of why I never got on the Trump Train was that I never trusted him to really replace Scalia with anyone significantly more conservative than say Merrick Garland, who was nominated by President Obama, but who never even got a hearing, and who probably would have been Hillary’s choice as well. It always seemed to me that conservatives who went along with Trump all for the admirable objective of saving the Supreme Court were paying an exceeding high price for a golden ticket which very well might turn out to be rather tarnished.

So it was with great interest that I watched Senate Minority Leader Chuck Schumer promise that he will do everything he can to keep a Republican-approved Trump nominee from being confirmed to the court. Senate Majority Leader Mitch McConnell immediately responded that “the American people will not tolerate” Democrats blocking the open seat from being filled by Trump.

Reaction on the right has been mostly consistent with McConnell’s optimism. The thinking goes: Trump won the election, elections have consequences, and this seat, already the “property” of conservatives, is clearly part of the spoils belonging to the victors.

While I agree in concept with all of that, I also believe that the reality of this situation could work out very differently and far more in line with Schumer’s stance than McConnell’s.

The first miscalculation on the right is the idea that, as McConnell seems to be doing, Republicans can remotely count on an uprising of public outrage if Trump is denied the ability to get anyone he wants appointed to the Supreme Court. This is flat-out delusional on multiple levels.

First of all, Americans don’t get outraged about anything anymore. They certainly aren’t going to revolt because there are currently only eight members of the Supreme Court, especially when that has been the case for almost a year with absolutely no consequence to their lives whatsoever.

Related to that, of course, is that fact that our current president nominated a seemingly qualified and somewhat moderate judge for the position, never even got a hearing, and the story got so little attention that Garland didn’t even come close to becoming a household name. For better or worse, no one cared. Very few Americans are going to give a damn about it when Republicans start bitching that Democrats are doing exactly the same thing they were for almost a year.

This is especially the case when, despite what Trump, racked with insecurity, constantly claims, he has no electoral “mandate.” This is where the popular vote actually does matter. It will be very difficult for Trump to claim the moral high ground in any Supreme Court confirmation battle because only 46% of Americans voted for him and his own party just made it clear that living with eight justices is no big deal.

When you combine all this with the fact that almost all of the “non-Trump” news media will have absolutely no desire to help him get a real conservative through a filibuster, it seems pretty clear that Schumer’s poker hand starts off a lot better than it may initially seem. However, there are even more reasons for hopefulness on the Democratic side.

Many on the right think that if Schumer blocks any Trump nominee from getting an up or down vote that the GOP could simply “nuke” the filibuster. In theory this is correct, and the Democrats have already blown their argument against this with their prior legislative maneuvers. But this presumes that there are enough Republican votes to go that risky route and with Orrin Hatch, Lindsay Graham, and John McCain almost certain “no” votes on such a move, this tactic seems far easier said than done.

At the very least, Republicans would have to wait for Democratic obstructionism to become so extreme and obvious that the “nuclear” option is seen as a last resort. This requires time, probably lots of it, and this is where things should again work in Schumer’s favor.

This would mean that there will be many other agenda items which will be taken care of first before a final vote on a Trump nominee. Consequently, Trump will have plenty of other opportunities to please his base, thus reducing the imperative to give them a decisive SCOTUS victory. It also increases the chances that something goes very wrong politically for Trump, reducing both Trump’ popularity and his bargaining leverage.

But perhaps the most important thing Schumer would accomplish with a protracted fight on this turf would be that Trump would eventually tire of it and fall back to his natural instincts to negotiate a settlement. Trump’s modus operandi (just as he did in the Trump University lawsuit) is to talk big at the start of battle, but then rush to settle for something less than he promised while declaring victory. I see this scenario as quite likely to play out in this situation as well.

After many months of no movement on his first nominee (which will probably be from his famous list of approved conservatives), I can totally see President Trump, tired of a fight he doesn’t really personally care about, one day suddenly tweeting, “To Make America Great Again we need nine SCOTUS members. Today, I met with Mitch and Chuck and we came up with a fantastic solution. Time to move on. #MAGA.”

The fact that Trump was forced to create the “list” in order to placate understandably nervous conservatives, should actually play very much into Schumer’s favor now. Because Trump will almost certainly choose from it to start the process, it gives Schumer plenty of cover to say “no way.” Then, all Schumer has to do to “win” is to get the person who is eventually confirmed to not be on the list. Not only would forcing this allow liberals to be able to claim some victory, but it would also create a schism among hardcore conservatives who would see it as a betrayal.

Importantly, Trump’s real base would not see it that way at all. Trump told them it was a great victory and the person he picked was clearly better than whoever Hillary would have chosen (as long as it is not Garland or Obama himself), so such a move would create no problem for them at all. Heck, they are already more than willing to side with Russia against our own intelligence agencies on nothing more than Trump’s own very dubious word. What makes this “cave & claim victory” gambit even more attractive to Trump in this situation is that no one knows for sure if a SCOTUS pick is good or bad for at least a couple of years. By then, at least to Trump, this is very old news.

I have been burned before making forecasts dealing with Trump and have tried to keep from repeating my same mistakes, but I am willing to make this prediction: there is a better than even chance that either there will still be no replacement for Scalia on the day of the next election, or that the person confirmed to the position will not come from Trump’s list.