Democrats Threaten to Out Residents if They Don’t Vote 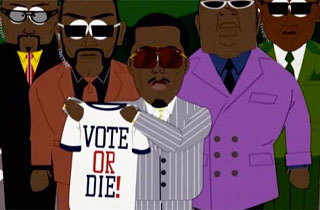 Voting is good! Voting is a civic duty! Voting is the cornerstone of democracy, and a shining example of America’s innate virtue, an example the world should follow! And, if you don’t vote, the New York State Democratic Committee will probably break your kneecaps.

New York City residents registered with the Democratic Party received somewhat ominous letters this morning, urging them to vote in the upcoming midterm elections…or else they’ll get a visit from the Democrats, who just want to know why they didn’t vote, honest.

Here’s one from Brooklyn resident and songwriter Jonathan Coulton:

I think the Democrats just threatened me: pic.twitter.com/wGvYInosk5

A person in Queens County got a similar letter:

A Manhattanite reported receiving a similar letter. “I can’t believe they think this will actually make anyone more likely to vote, and it certainly doesn’t make me want to vote for any of the Democratic establishment candidates,” he told Gothamist.

In a statement, an NYSDC spokesman denied that the Dems were pulling some Tammany Hall-type moves. “This flyer is part of the nationwide Democratic response to traditional Republican voter suppression efforts,” said Peter Kauffmann, “because Democrats believe our democracy works better when more people vote, not less.”

While it’s highly improbable that the Republicans are actively trying to suppress votes in New York City, Talking Points Memo reports that the voter-shaming tactic is common in many states, used by both parties, and seems to be flourishing in this election cycle:

In Alaska, voters have complained about receiving a similar kind of letter from a group that received a hefty contribution from a charter-school supporter who wants to elect a GOP Senate (though he disavowed the mailers).

“Why do so many people fail to vote? We’ve been talking about the problem for years, but it only seems to get worse,” the Alaska letter says. “This year, we’re taking a new approach. We’re sending this mailing to you, your friends, your neighbors, your colleagues at work, and your community members to publicize who does and does not vote.”

In Florida, a St. Petersburg blog reported earlier this week on a letter sent by a group funded by the state and national realtors association. “Your neighbors will know,” the letter warns. “It’s public record.”

Yet another reported vote-shaming letter in North Carolina, sent by the state Democratic Party, contains some of the exact same wording as the New York letter.

But while their efforts are noteworthy, New York has been perfecting the tactic of scaring the shit out of potential voters since the days of Tammany Hall.