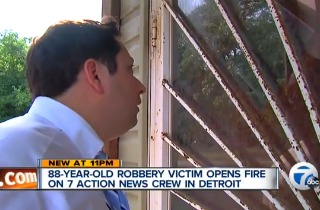 An elderly Detroit man who was the victim of a recent home invasion opened fire on a small news crew from WXYZ when they approached his home and asked him for an interview. Reporter Jonathan Carlson spoke to the man through the door, asking him for an interview to give him a chance to explain what happened to him.

This unnamed man reportedly had his house broken into and he was tied up as two men pushed him in, put a gun to his head, and robbed the place.

When Carlson attempted to talk to him (making sure to identify himself multiple times), the man came to the door with a handgun. They bolted, the man stepped onto the porch and shot at them. No one was hurt, and police showed in moments later to arrest him.