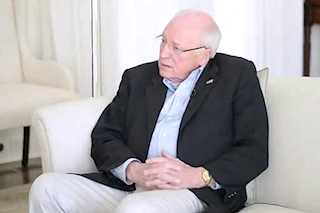 When Sen. Rand Paul (R-KY) appeared on Meet The Press this past weekend, he took a shot at former Vice President Dick Cheney for laying blame on President Barack Obama in regards to the current crisis in Iraq. Today, Cheney fired back at the senator and his “isolationist” policies.

On the possibility of a Paul presidency in 2016, Cheney said simply, “Isolationism doesn’t work as a philosophy for defending the nation.”

In a post-9/11 world, Cheney described “isolationism” as an outdated concept. “Given today’s technology” when “19 guys with nothing more deadly than airline tickets and box cutters” can “come over here and strike the homeland in the worst attack ever on the United States of America,” Cheney said Paul’s policies would be dangerous.

“Isolationism, I think, is a flawed concept,” Cheney concluded. “My disagreement with Rand Paul isn’t personal. It’s on substance. But I just think he’s wrong.”

On Sunday, Meet The Press’ David Gregory asked Paul directly about Cheney’s op-ed, in which he wrote of Obama, “Rarely has a U.S. president been so wrong about so much at the expense of so many.”

“I think the same questions could be asked of those who supported the Iraq War,” Paul told Gregory.

Cheney has clearly decided to label Paul an “isolationist,” and affix all of that word’s negative connotations to the junior senator for Kentucky. But as our own Andrew Kirell pointed out earlier this year, there is distinct difference between “isolationism” and “non-interventionism” that gets lost in the conversation.

Watch video below, via The Daily Caller: