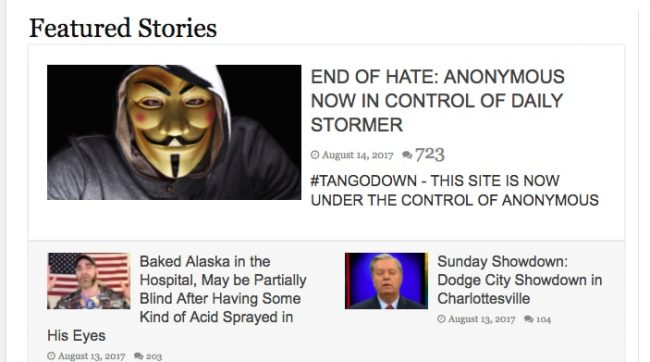 On Monday all 27 regular readers of the Neo-Nazi website The Daily Stormer came in for a rude awakening. In the site’s featured story, an image of a man in Guy Fawkes mask was draped above the headline, “END OF HATE: ANONYMOUS NOW IN CONTROL OF DAILY STORMER”

In short — it appeared to be a hack.

Anonymous, a loosely associated hacker collective that crops up online from time to time, apparently took exception to some of the Stormer’s coverage of the violence in Charlottesville, Virginia.

Readers who clicked the link were greeted with the following:

THIS SITE IS NOW UNDER THE CONTROL OF ANONYMOUS

THAT WILL NOT BE HAPPENING ANYMORE

THIS EVIL CANNOT BE ALLOWED TO STAND

WE WANT YOU NAZIS TO KNOW: YOUR TIME IS SHORT

THEN WE WILL SHUT IT DOWN

YOU SHOULD HAVE EXPECTED US

The message remained on the Daily Stormer main page as of 10:00 a.m. EST.

Ok — seems legit. The website is mostly maintained by founder Andrew Anglin and if he truly was hacked, it’s possible enough that he has yet to regain control. His web hoster, GoDaddy.com announced late last night that they were dropping him, so they are likely not inclined to be very helpful either.

The case, however, isn’t as open and shut as it seems. The account @YourAnonNews, which is not verified, but often taken as a source of information about Anonymous, posted a series of Tweets early Monday saying they were not behind the attack and suggested it was a false flag operation from Anglin to rally his base.

We have no confirmation that “Anonymous” is involved yet. Looks more like a DS stunt. Wonder if they are having issues finding a new host. https://t.co/ikXXRBfC5p

This is likely to be the derps from dailystormer engaging in a silly troll to woo their clueless base. If we’re proven wrong, so be it. https://t.co/dkiXGCDEwY

The hack is curious as no other content on Daily Stormer appears to have been affected. So what is going on here — in short, we have no idea.