Nazi Website, Daily Stormer, Dumped From Domain Provider: ‘They Have 24 Hours to Move’ 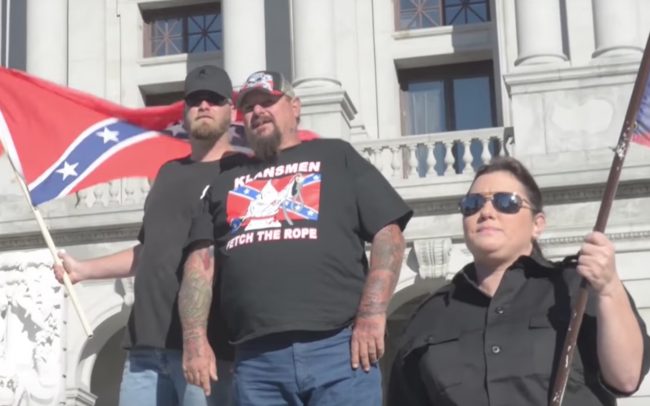 The Daily Stormer, a white supremacist, Nazi-aligned website has been given 24 hours to relocate their site from the domain provider GoDaddy.

The company told the Daily Stormer they had 24 hours to find a new provider after being made aware of complaints about Stormer’s coverage of white supremacist protests in Charlottesville, Virginia over the weekend.

“We informed The Daily Stormer that they have 24 hours to move the domain to another provider, as they have violated our terms of service,” the company tweeted late Thursday evening.

We informed The Daily Stormer that they have 24 hours to move the domain to another provider, as they have violated our terms of service.

The company’s firm response came in response to a tweet from the account @slpng_giants which brought to their attention a Stormer article titled, “Heather Heyer: Woman Killed in Road Rage Incident was a Fat, Childless 32-Year-Old Slut.” (and no we’re not linking to it)

Heyer, of course, was killed when a neo-Nazi protester rammed his car into a crowd of counter-protesters.

The article was written, by Stormer chief Andrew Anglin. The same piece also lionized her murderer James Fields as a “straight player.”

“Despite the cool demeanor he shows in his social media profile pictures, it appears that road rage got the best of him,” wrote Anglin.

.@Blakei as a CEO who has worked hard for equality at @GoDaddy, we hope you’ll reconsider doing business w/ a site that publishes this. Thx. pic.twitter.com/kkOqPByocq

If the threat from GoDaddy is genuine, the move could put the lights out for Stormer before the end of Monday unless the website makes other hosting arrangements.

While the Stormer has reached new levels of notoriety under the presidency of Donald Trump, things have not been going well for Anglin. Only hours before, the website was broken into by Anonymous, an online hacking collective. He also recently chastised his own ranks for being too fat.