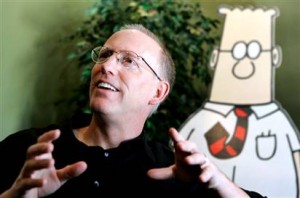 Scott Adams, the creator of the Dilbert comic strip (You know: Cubicles, vaguely amorphous dog, quiet desperation) has a blog where he’ll occasionally share his take on current events like, for example, the “alarming trend in the news” regarding men powerful men doing bad things like textin’ and rapin’ (which, one must admit, encompasses quite a wide range of what can be considered “bad behavior”).

Adams begins his blog entry by asking which animal, if any, would be to blame if a lion happened to eat a zebra at a watering hole. He answers that, obviously, both animals are simply acting in accordance to their natural instincts. Now, next question: How can we apply this to humans in a way that would allow us to be as offensive as possible to both men and women? Ah, yes. We can claim that men who behave badly are merely acting naturally. Adams is, of course, quite careful to make sure we don’t blame the victims of sexual violence while we proceed to blame the victims of sexual violence:

The current view of such things is that the men are to blame for their own bad behavior. That seems right. Obviously we shouldn’t blame the victims. I think we all agree on that point. Blame and shame are society’s tools for keeping things under control.

The part that interests me is that society is organized in such a way that the natural instincts of men are shameful and criminal while the natural instincts of women are mostly legal and acceptable. In other words, men are born as round pegs in a society full of square holes. Whose fault is that? Do you blame the baby who didn’t ask to be born male? Or do you blame the society that brought him into the world, all round-pegged and turgid, and said, “Here’s your square hole”?

First off: This is, perhaps, not the best analogy to use when discussing things like rape. Second: Oof, ew, cringe. To say that men have a natural inclination to rape is to participate in the wildly misandrist notion that men are base, selfish creatures who cannot control their impulses and, thus, require something else – like women – to act as the gatekeepers of morality. Third: Let me play devil’s advocate here for a second and note that simply stating that something is natural, whatever that word means to you, does not automatically mean it is correct or an unchanging fact across time and space. In many ways, what is “natural” is relative to things like culture or religious ideology, making this argument fairly moot. So there, Scott Adams.

Or, perhaps, we have no choice but to place blame on some people, some of whom are men when they do things that are deserving of blame; things like, oh, breaking the law or violating trust or letting down their supporters or taking advantage of their power.

I might not be in a position to speak about the inner emotional landscape of the male human, but I highly suspect that men, like women, have urges that are sexual in nature. Can we agree on that? That men and women, generally speaking, like having sex? We think about it a lot, maybe even write books and make movies about it? Write songs about it sometimes? We do things like go on dates, get slightly tipsy, and bathe on occasion in order to attract people with whom we can have sex, maybe even (Bonus!) propagating our species in the process? Yeah? Great. Glad we agree.

Here’s a bit of knowledge for Scott Adams: Sexual urges are not limited to men, and it’s not just women who are able to control these urges when, say, interacting with attractive strangers on Twitter. “I couldn’t help myself” is not an excuse, it’s an indication of being either utterly immature and irresponsible or the symptom of some deeper form of sexual psychosis that really ought to be remedied with the quickness.

And, then, there’s this:

To be fair, if a man meets and marries the right woman, and she fulfills his needs, he might have no desire to tweet his meat to strangers.

You guys. I think it should be super obvious to everyone by now that Huma Abedin made Anthony Weiner Tweet pictures of his genitalia to strange women. Obviously, she’s not fulfilling him at home and, being a man, he must turn elsewhere in order to fulfill his insatiable, inherent desire to have women… look at his penis? Tell him how hot he is? Laugh at his superhero jokes?

Please remind me not to open any emails from Scott Adams.

So here’s a question I have for men reading this: Do you ever become offended (Or amused or frustrated or, you know. What have you.) with the idea that “men just can’t control themselves”? Let me know what you think about Adams’ assertion, guys.