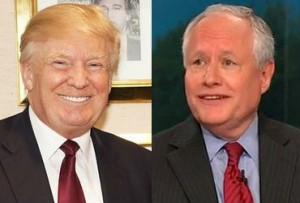 Master of terrible political predictions Bill Kristol of The Weekly Standard has a brand-new goal: Beating back, in his own words, the narrative that the “rise of Trump” spells doom for Republicans. Kristol came to this conclusion soon after Donald Trump‘s rather disastrous take-down of John McCain over the weekend. Before that, his crystal ball was rather friendly to the guy whose name rhymes with “hump.”

Early on Wednesday morning, Kristol tweeted a link to another publication’s article:

A few hours later, the Weekly Standard editor decided to reach into his trusty advice jar and distribute some of its contents to Trump’s campaign:

But the Donald was not to be outdone, no sir! His trusty social media intern quickly took Trump’s orders to Twitter on Thursday, tweeting to Kristol that his “failing magazine” would be a “giant success” if it endorsed his campaign:

.@BillKristol Bill, your small and slightly failing magazine will be a giant success when you finally back Trump. Country will soar!

ZING! WOW! AMAZING! Kristol must have been devastated by that massive, predictably financial-in-nature insult. Actually, he as probably blissfully unaware of Trump’s tweet since he was a guest on Laura Ingraham‘s radio show on Thursday morning. The episode’s primary talking point? I’ll give you three guesses…

Those who believe that if only Trump leaves race all will be set right in the GOP are really not paying attention. — Laura Ingraham (@IngrahamAngle) July 23, 2015

.@BillKristol: “People are disappointed in the GOP leadership, Republicans have not been hurt by @realDonaldTrump.” — Laura Ingraham (@IngrahamAngle) July 23, 2015