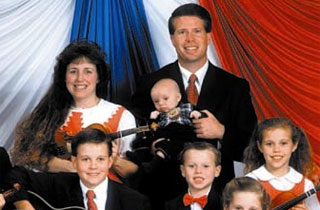 When In Touch broke the news that reality star Josh Duggar was arrested as a teenager for sexually assaulting his sisters, his parents quickly rose to his defense. “Even though we would never choose to go through something so terrible, each one of our family members drew closer to God,” Jim Bob and Michelle Duggar said in a joint statement. “We pray that as people watch our lives they see that we are not a perfect family.”

But did you know that before he was the star of 19 Kids and Counting, Jim Bob was a somewhat prominent political figure in Arkansas, serving as a member of the state’s House of Representatives? Gawker remembered. Gawker also remembered that he ran for U.S. Senate in 2002, losing in the GOP primary to then-incumbent Sen. Tim Hutchinson. They discovered Duggar’s cached campaign page from the time, which says the following:

Q. What is your abortion position, and specifically, where do you stand on rape, incest, and threat to the mother’s health?

A. If a woman is raped, the rapist should be executed instead of the innocent unborn baby. Adoption is an option. Many couples would love to adopt and are waiting for a baby. Abortion has been and always will be the destruction of an innocent child. Rape and incest represent heinous crimes and as such should be treated as capital crimes. The developing infant committed no crime and should be allowed to live. In the unlikely event that the life of both mother and baby would both be lost (for example, a tubal pregnancy) all should be done to save the life of the mother.

Sorry, could you repeat that part again?

Rape and incest represent heinous crimes and as such should be treated as capital crimes.

Josh Duggar, who resigned his position at the pro-life Family Research Council as a result of the revelations, is currently very much alive and not on death row.