Meet Stevie. Stevie seems a pleasant sort — beginning the workday by jovially wishing everyone on Twitter a “Happy Friday.”

But Stevie happens to work for Equifax. And so, for our pal Stevie, it almost certainly will not be a happy Friday.

In case you missed it on Thursday, Equifax was hit with a massive cyberattack which — per The New York Times — potentially compromised the social security and driver license numbers for as many as 143 million people nationwide.

Stevie was in the unfortunate position of running the company’s troubleshooting Twitter account, @askequifax. Stevie began the workday with this now-deleted message: 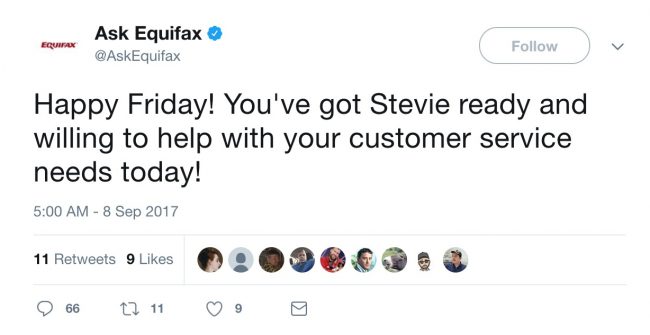 Stevie’s happy Friday wishes did not go over well at all with the Twitterverse. Here are a few of the reactions:

prayers up for stevie pic.twitter.com/QkB3DTjYjc

Do we get to fire your top executives ourselves as consumers or will there be a livestream to watch this happen?

This will not end well…

So why does your victim list require us to put in our SSN? Why would we trust you with that ever again?

stevie am i fucked

Stevie, I’m thinking you are about to have a really bad Friday.

Glad you are chipper and ready to help but probably should have helped to prevent the data breach from happening. #losttrust

How can I request a 100 point bump in my credit score for the inconvenience?