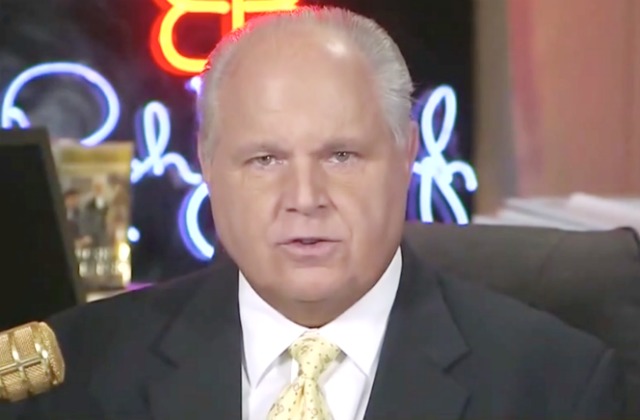 Conservative radio host Rush Limbaugh has taken a ton of heat over the past few days for essentially claiming that the warnings over Hurricane Irma — a massive Category 5 storm heading right for Florida — were related to a broader “deep state” conspiracy to promote climate change, force people to buy bottled water and increase the news media’s ratings.

During his radio program yesterday, Limbaugh remained defiant, claiming that media accusations that he was placing people in danger by spreading conspiracy theories were completely untrue. And yet, at the same time, he doubled down on what he previously had said, accusing liberals of being excited about the storm because they hope it will push their agenda while again stating retailers and news outlets will benefit from the dire warnings.

But Limbaugh made a quiet admission — as his show is broadcast from South Florida, he will not be on the air today as he will need to flee due to the storm.

“May as well — announce this,” Limbaugh told his audience. “I’m not going to get into details because of the security nature of things, but it turns out that we will not be able to do the program here tomorrow.”

He noted that Mark Steyn will fill in as the host on Friday while explaining that he’ll be back on the air next week, for “parts unknown.” However, due to certain events, it would be “legally impossible” for him to do the show on Friday.

Limbaugh also lamented that he would be missing some other activities, like a free movie screening. And despite admitting that he was fleeing the state due to the decimating storm that was coming his way, Rush made sure to boast that the views he expresses on his show are “right 99.8 percent of the time.”

After ThinkProgress first highlighted Limbaugh being among the evacuees, a number of folks took to Twitter to react:

life comes at you fast pic.twitter.com/A8zLbN92Qd

Listen to the clip above, via KOGO-AM.