In a blog post on ESPN.com yesterday, ESPN public editor Jim Brady criticized SportsCenter anchor Jemele Hill for her “ill-advised” tweets labeling President Donald Trump a “white supremacist.” He noted that while part of Hill’s job as a commentator is to express her opinions, she “erred by ignoring company guidelines” and put the network is a “difficult position.”

He further went on to state that it was obvious that ESPN leaned left and that the answer to navigating the intersection of sports and politics is to improve the network’s “ideological diversity.” As would be expected with a post like this, Brady faced backlash on social media, and he decided to engage. And during that engagement last night, he sent the following tweet: 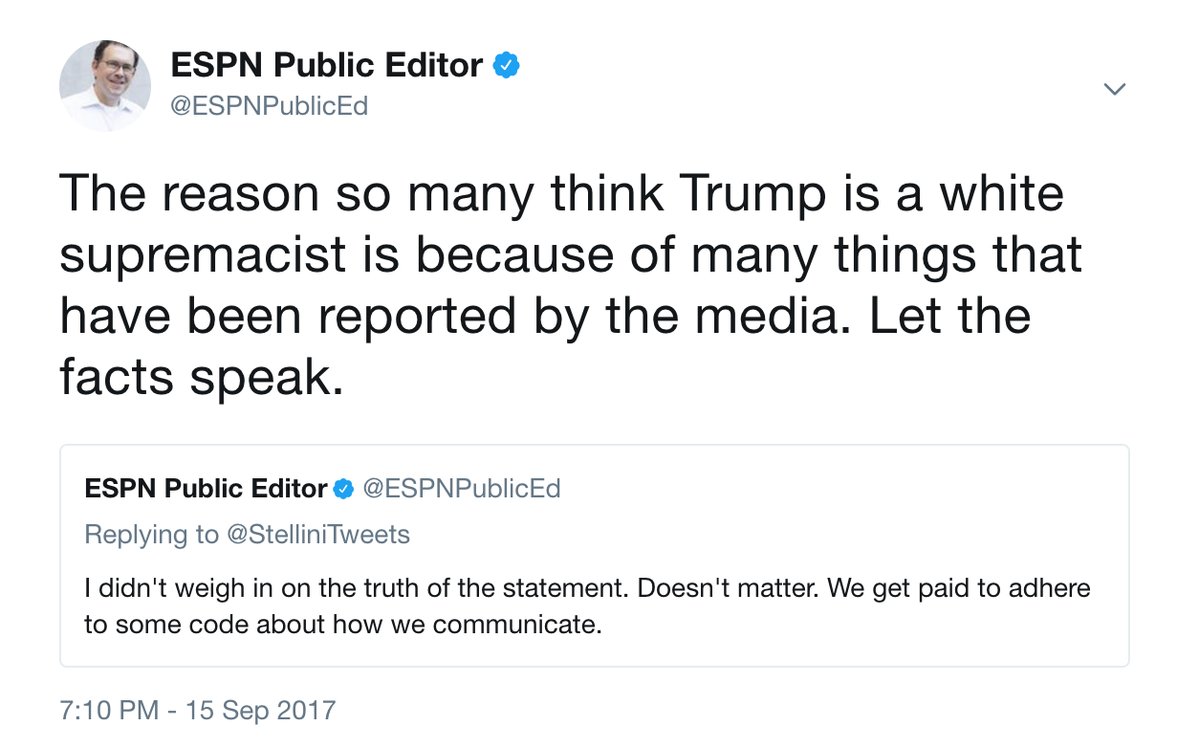 Welp, that tweet didn’t go over well at all, as it appeared he was attempting to lay the blame on the media for not portraying the president in a positive enough light.

Eventually, Brady deleted the tweet and offered up the following explanation:

I'm going to delete the tweet shown below. Many of you misunderstood the intent, because, well, I wrote it really poorly and quickly. /1 pic.twitter.com/Ruv3Oxbk68

The point was the press is doing its job, and reporting facts that can be used by any citizen to judge the president on this subject. /2 pic.twitter.com/9kO6ESgdBV

And my position – as unpopular as it may be to some – is that we let the reporting do its work, and resist more incendiary labels. /3 pic.twitter.com/99eEW7zL9F

And then he ended his evening of Twitter engagement over the whole uncomfortable topic by tweeting out his appreciation for those who got into it with him on Twitter:

With that, now home and logging off. Obviously, lots of strong opinions here, but do appreciate those who engaged in the back-and-forth.

Meanwhile, as the Hill controversy has consumed ESPN, network president John Skipper sent a memo to ESPN staffers saying they needed to remind themselves that they’re a journalistic organization.