ESPN has pulled Curt Schlling for the rest of the season in the continuing fallout from Schilling tweeting a link between Muslims and Nazis last week. 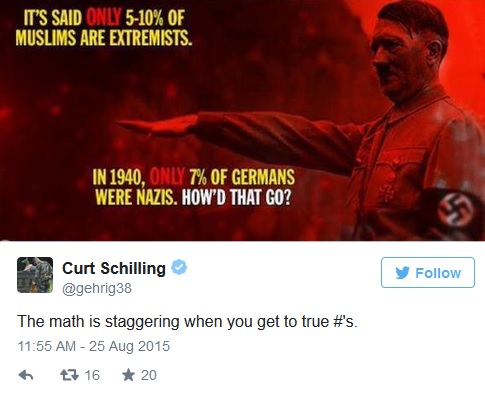 ESPN suspended him from his current reporting assignment, which Schilling accepted:

I understand and accept my suspension. 100% my fault. Bad choices have bad consequences and this was a bad decision in every way on my part.

Earlier this week, Schilling sent Awful Announcing telling them they took him way out of context.

He went on a bit of a rant about how they’re trying to smear him with a “bullshit” article:

I think you lack integrity, I think you lack an ounce of pride in your work and I think you’re a weakling to submit to personal bullshit attacks and lies in a public facing forum of a person you’ve never met, and don’t have the first idea about off the field. But I wil admit I could be wrong, as I have absolutely no idea who and what kind of person you are.

At all times during the course of their engagement with us, our commentators are directly linked to ESPN and are the face of our brand. We are a sports media company. Curt’s actions have not been consistent with his contractual obligations nor have they been professionally handled; they have obviously not reflected well on the company. As a result, he will not appear on ESPN through the remainder of the regular season and our Wild Card playoff game.