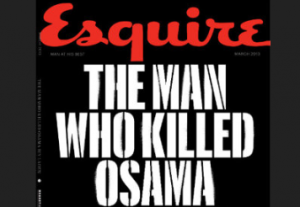 Yesterday, Esquire made a splash with its story about how the Navy SEAL who says he killed Osama bin Laden “is screwed.” Specifically in terms of benefits and health care. Stars and Stripes then said that wasn’t true and criticized the story for inaccurately portraying the SEAL’s situation. Esquire, too, fired back.

Stars and Stripes’ Megan McCloskey wrote that “no servicemember who does less than 20 years gets a pension, unless he has to medically retire.”

“Like every combat veteran of the Iraq and Afghanistan wars, the former SEAL, who is identified in the story only as ‘the Shooter,’ is automatically eligible for five years of free healthcare through the Department of Veterans Affairs,” she added. “But the story doesn’t mention that.”

The article’s author, Phil Bronstein, said, “No one ever told him that this is available.” And that there wasn’t enough room to go into the background his not being informed about it.

On Tuesday, Esquire, too, published a lengthy response to Stars and Stripes, noting that Bronstein does establish that the Shooter and his colleagues had to turn to the private market for insurance — and that the transition “was an abrupt one.” McCloskey’s assertion that Bronstein said he was “denied” health care, Esquire argued, is one “factual error” of several.

McCloskey’s story is entitled, “Esquire article wrongly claims SEAL who killed bin Laden is denied healthcare” and it is that headline that contains her first factual error, for nowhere in Bronstein’s piece does he write that the Shooter was “denied” healthcare. Rather, what Bronstein’s piece properly establishes is that once the Shooter and his colleagues separate from the service, they must go into the private market to buy insurance to match the coverage for themselves and their families that they had when they worked for the government, and that this transition is an abrupt one. There are benefits available to combat veterans via the VA, which “The Shooter” discusses (this constitutes the second factual error in McCloskey’s piece, more on that in a moment), so what does Bronstein mean when he writes, “Nothing. No pension, no health care, and no protection for himself or his family…”? Well, he means precisely that. Because while the Shooter may be eligible for some direct benefits from the VA, his wife and two children are eligible for nothing. Not to get too deeply into the philosophy of insurance and the distribution of risk, but that means that under the best scenario, the Shooter is 1/4 covered, which of course means that he is not covered at all. It would be like having a 1/4 roof during a storm. Your house still fills with water. What good does it do the man if he can go to a government chiropractor for his neck when (heaven forbid) his child could get sick and wipe out the family? It is a simple fact that when your family doesn’t have healthcare, you don’t have healthcare. Think the Shooter has healthcare? We respectfully suggest that Ms. McCloskey ask his wife.

The full response — which goes on to pick apart details in McCloskey’s criticism — is here.