Every Top Republican Invited to MLK Anniversary Event Said No 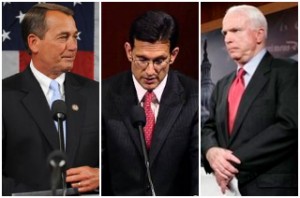 Conservative commentators have had a lot to say over the last 24 hours about the fact that Sen. Tim Scott (R-SC), the only African-American in the Senate, was not invited to yesterday’s March on Washington 50th Anniversary celebration. According to Bill O’Reilly, it was strange that “no Republicans and no conservatives were invited” to the event. As it turns out, that’s just not true.

As the Washington Post’s Ed O’Keefe reported today, “not a single Republican elected official stood on the steps of the Lincoln Memorial on Wednesday.” But it’s not because they weren’t invited. While Scott’s office has confirmed that the senator was not invited, many of his senior colleagues were.

Here’s a run-down of the top Republicans who were invited to the March on Washington anniversary event, and why they reportedly decided not to show.

The Rev. Leah D. Daughtry, who served as executive producer of the commemoration, told the Washington Post’s O’Keefe that her committee began inviting members of Congress to attend four or five weeks before the event.

“We had a very concerted effort, because this is not a political moment. This was about us coming together as a community, so we wanted to be sure that we had all political representations,” Daughtry said. “We attempted very vigorously to have someone from the GOP participate and unfortunately they were unable to find someone who was able to participate.”