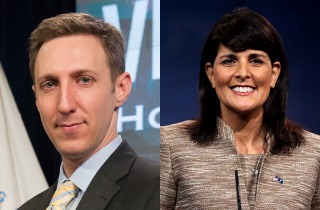 Early Thursday morning, South Carolina governor Nikki Haley released a statement condemning the shooting in Charleston, asking what could have motivated the murder of innocents during a peaceful religious meditation. Shortly afterwards, Brandon Friedman, the former deputy assistant secretary of public affairs at the Department of Housing and Urban Development, decided to cash in on the attention by linking the event to an unrelated story from Haley’s part.

The link between the shooting and the flag defense is currently unclear, and Friedman has not responded to those who have tweeted him in response. Many of those respondents have given Friedman their disapproval, saying that he is using the tragedy in order to politicize a comparatively-trivial incident.

@BFriedmanDC You couldn't wait until the bodies were cold to score political points? #CharlestonShooting

@BFriedmanDC this is relevant. Not.

WTF? @BFriedmanDC How does this help? Are you accusing Nikki Haley? Absolutely classless.

@thehiredmind @BFriedmanDC @scooterrat So we need to be on the look out for a flag 115 miles way from the shooting. #LiberalThink

.@BFriedmanDC You sure you want to go this route, guy who called military officers psychopaths?

@BFriedmanDC Apparently there is NOTHING you people in the admin won't politicize. Pure evil. #NeverAgainIsNow #TCOT #PrayforCharleston

.@BFriedmanDC Couldn't you at LEAST express condolences before exploiting 9 deaths for political gain?

@BFriedmanDC This is appalling. What is the matter with you? Where's the connection? What is your point?

@BFriedmanDC just can't help yourself, can you? Grow up and try to act like an adult. No wonder you are out of work