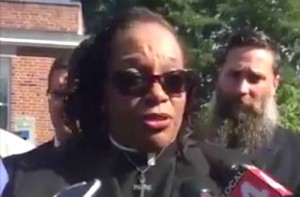 After cutting off Donald Trump during his speech at a church in Flint, Michigan, Rev. Faith Green Timmons stood by her decision on Wednesday as she spoke with the press.

Trump spoke at Bethel United Methodist Church yesterday, but he was interrupted by Timmons as she tried to remind him that the church didn’t invite him to hear him politicize the Flint water crisis. While Timmons told reports that the event was open-doors, she said the church asked the Trump campaign to stick to a series of topics, and that there was friction when the campaign insisted on diverting from the approved subjects.

“He asked to come in to make a statement and the statement began to go beyond what he originally said, I asked him to stick to what he said,” Timmons said. “You came here to welcome our workers and thank them for what they have done and that’s what he stuck to.”

Timmons also stated that the church invited Trump in order to show him the congregation’s dedication to helping the needy, as the city continues to address the lead contamination.

“Some of the statements that I’ve heard him make about African-Americans, Mexicans and others were degrading,” Timmons said. “I wanted him to see intelligent people, loving people, caring people, who have done well with the resources that they had.”

Trump, for his part, made a joke about the water crisis at a campaign event last night, and said today on Fox & Friends that Timmons was trying to play “games” with him.