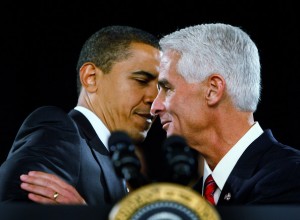 Former Florida Gov. Charlie Crist endorsed President Barack Obama in an op-ed in The Tampa Bay Times on Sunday. Touting the president for serving as the “nation’s calm,” Crist, now a registered independent, decried the GOP’s shift to the “extreme right.”

With a reminder of how the severity of the country’s problems upon Obama’s election, Crist applauded the president for serving “as the nation’s calm through a historically turbulent storm.” He went on:

The president’s response was swift, smart and farsighted. He kept his compass pointed due north and relentlessly focused on saving jobs, creating more and helping the many who felt trapped beneath the house of cards that had collapsed upon them.

As Republicans gather in Tampa to nominate Mitt Romney, Americans can expect to hear tales of how President Obama has failed to work with their party or turn the economy around.

But an element of their party has pitched so far to the extreme right on issues important to women, immigrants, seniors and students that they’ve proven incapable of governing for the people. Look no further than the inclusion of the Akin amendment in the Republican Party platform, which bans abortion, even for rape victims.

The truth is that the party has failed to demonstrate the kind of leadership or seriousness voters deserve.

POLITICO noted that while the move isn’t a shock, the interesting aspect is related to “ongoing rumors about Crist running for governor again, only as a Democrat.” While he doesn’t make any mention of a run in the op-ed, ” if Obama wins Florida, this would be a handy thing for Crist, whose original consulting team is with Romney, to point to having done – and supporting the Democratic president is sort of a half-measure toward announcing as one himself.”

Read the full op-ed over at The Tampa Bay Times.