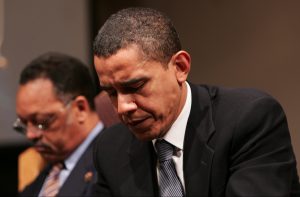 Former director of President Barack Obama‘s faith outreach efforts Michael Wear chastised his own party for failing to reach out to religious Americans and losing its understanding of how they think.

Wear, an evangelical Christian Democrat, told The Atlantic that he watched in dismay as Obama slowly alienated the religious voters that propelled him to victory twice. At times, his co-workers seemed to lack a basic understanding of Christianity. When he wrote a memo about how Obama supported “The Least of These”– a quote from Jesus– his superiors tried to delete it thinking it was a typo, asking “who/what are ‘these?'”

“We have a politics right now that is based on making enemies, and making people afraid…” he said. “It’s much easier to make people scared of evangelicals, and to make evangelicals the enemy, than trying to make an appeal to them.”

Wear criticized Hillary Clinton in particular for abandoning her previous rhetoric about her moral reservations about abortion in order to court pro-choice donors. “On the pro-life side, they care not just about the regulations around abortion, but whether there’s a cultural affirmation of life,” Wear said. “Even the symbolic olive branches have become less acceptable.”

He also criticized Clinton over reports that her campaign chose to actively ignore white Catholics and evangelicals during the 2016 election. “America is still a profoundly religious nation…” Wear argued. “That’s a huge portion of the electorate to throw out. So if the civic motivation doesn’t get you, let me make the practical argument: It doesn’t help you win elections if you’re openly disdainful toward the driving force in many Americans’ lives.”