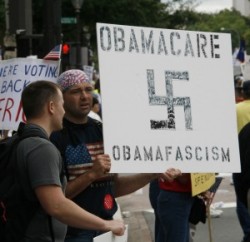 How curious that a mob fond of likening President Obama to Hitler knows so little about history that it doesn’t recognize its own small-scale mimicry of Kristallnacht. The weapon of choice for vigilante violence at Congressional offices has been a brick hurled through a window. So far.

In case you missed it, Frank Rich penned one of his epic, touchstone columns yesterday; the sort that will subsequently be brandished on both sides of the aisle as evidence the opposition had gone off the rails, as was evidenced on yesterday’s Sunday shows. It is, of course, exactly the sort of thing Rich is paid to do. For what it’s worth, the piece is currently riding a top the NYT most emailed list, where I imagine it will stay for at least a few days, not to mention, it was all over Twitter for the better part of yesterday.

The short version: these violent health care protests — the ones we’ve been hearing so much about this week — are nothing new. The country suffered a strikingly similar reaction after the Civil Right bill was passed, leading Rich to conclude that much of the hysteria currently gripping Congress and parts of the country has nothing to do with health care and everything to do with prejudice.

The conjunction of a black president and a female speaker of the House — topped off by a wise Latina on the Supreme Court and a powerful gay Congressional committee chairman — would sow fears of disenfranchisement among a dwindling and threatened minority in the country no matter what policies were in play. It’s not happenstance that Frank, Lewis and Cleaver — none of them major Democratic players in the health care push — received a major share of last weekend’s abuse. When you hear demonstrators chant the slogan “Take our country back!,” these are the people they want to take the country back from.

Furthermore, the GOP needs to man-up.

Are these politicians so frightened of offending anyone in the Tea Party-Glenn Beck base that they would rather fall silent than call out its extremist elements and their enablers? Seemingly so, and if G.O.P. leaders of all stripes, from Romney to Mitch McConnell to Olympia Snowe to Lindsey Graham, are afraid of these forces, that’s the strongest possible indicator that the rest of us have reason to fear them too.