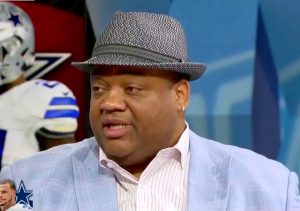 Last Friday, UFC star Ronda Rousey was knocked out in a fight for the second consecutive time — as she suffered a technical knockout loss at the hands of UFC women’s bantamweight champion Amanda Nunes in just 48 seconds. The lopsided defeat, coming in her first bout since her November 2015 knockout loss to Holly Holm, raises questions about whether she will ever fight again — and if so, whether she can be a force in the octagon again.

To the latter question, Fox Sports 1’s Jason Whitlock has a very clear answer: She was never a force in the octagon to begin with.

The Speak For Yourself host says that Rousey, who was 12-0 in the UFC prior to the Holm loss, was a product of “establishment media” hype — just like democratic Presidential nominee Hillary Clinton.

Whitlock shared his hot take via Twitter the day after Rousey’s loss to Nunes.

Face you make when you win the popular vote, but the Russians hacked the electoral college. pic.twitter.com/g7v2o68NfT

After some feedback from his followers, Whitlock added this:

Let me walk u through my beliefs: Ronda/Hillary = establishment media rig jobs who got exposed in 2016 and come up w/ludicrous excuses. https://t.co/t0UfhoQ6Hk

Rousey, for her part, did not make any excuses in her only public comment since the loss. In a statement provided to ESPN, the Olympic Bronze medalist said:

“Returning to not just fighting, but winning, was my entire focus this past year. However, sometimes — even when you prepare and give everything you have and want something so badly — it doesn’t work how you planned.”