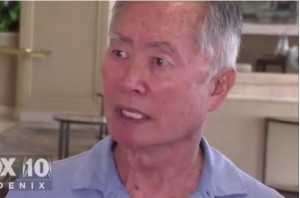 Actor George Takei took to his Facebook page Thursday night to explain what he meant by calling Supreme Court Justice Clarence Thomas a “clown in blackface,” saying the term was “theater lingo” that “is not racist.”

A few fans have written wondering whether I intended to utter a racist remark by referring to Justice Thomas as a “clown in blackface.”

“Blackface” is a lesser known theatrical term for a white actor who blackens his face to play a black buffoon. In traditional theater lingo, and in my view and intent, that is not racist. It is instead part of a racist history in this country.

I feel Justice Thomas has abdicated and abandoned his African American heritage by claiming slavery did not strip dignity from human beings. He made a similar remark about the Japanese American internment, of which I am a survivor. A sitting Justice of the Supreme Court ought to know better.

I have expressed my full thoughts on the matter here.

A few thoughts from one of Takei’s (former) fans.

2. Blackface is a “lesser known theatrical term”? Don’t be condescending. The people who took offense to your comments knew exactly what blackface is, and the entire ugly racist history behind it. On the contrary, you sound like the ignorant one for seriously trying to downplay that ugly history as just some cute theater factoid.

3. So blackface “is not racist,” but “is instead part of a racist history in this country.” I… I won’t even respond to this because it’s literally nonsense. I honestly don’t even know what he’s getting at.

4. “I feel Justice Thomas has abdicated and abandoned his African American heritage…” Let’s pause you right there. Who in God’s name are you that you have the right to tell someone that they have abandoned their entire race? It’s bad enough when conservatives of color get this from people of their own race, but now it’s apparently a racial elimination free-for-all.

And what kind of screwed up person believes that someone abandons their entire race because of their politics anyways? What sort of discourse will this country have when people are told that unless they toe the line on certain beliefs, they will be considered traitors to their race and Hollywood actors can shame them without facing any sort of retribution at all?

Of course, I suspect that if someone tried to erase George Takei’s entire racial (or sexual) identity in retaliation for an unpopular view he held, he’d have a slightly different take on the matter.

5. “…by claiming slavery did not strip dignity from human beings. He made a similar remark about the Japanese American internment, of which I am a survivor.” Takei had several hours to look up and read Thomas’ dissent to know that he was intentionally taken out of context. Many, many people pointed out that he was wrong. At this point, his stubbornness can only be chalked up to intentional blindness.

For God’s sake, Clarence Thomas was born in the rural Jim Crow South. He understands what it’s like to live under the thumb of a racist, oppressive government. Did anyone outside of the most hateful partisans really believe that he’s some sort of slavery apologist, and that he was open about that fact in the most widely read legal opinion for decades?

But apparently Thomas’ experiences with racism don’t mean squat, because some actor who scored one significant role and coasted for fifty years ago thinks he isn’t black anymore. And worse yet, judging by the complete silence from nearly everyone on the in Hollywood and on the left side of the aisle, a lot people have no problem with that*.

*Shout-out to Marc Lamont Hill, whose been one of the few liberals to date to loudly and publicly condemn Takei.