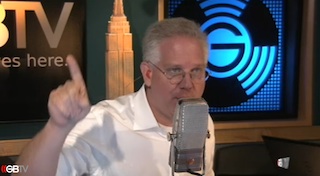 First Beck bit into what he saw as hypocrisy in Hillary Clinton’s hawkish response to Gaddafi’s death in comparison to her reaction to the previous President Bush’s toppling of Saddam Hussein. He then explained why he couldn’t feel particularly thrilled with the death footage.

“Let me tell you something. Muammar Gaddafi was an evil guy. I mean, an eternity in hell is not enough. It’s not enough for him. But did anyone see the last few moments of his life and actually kind of feel bad for him? I’m not saying he doesn’t get everything he deserves, but we’re talking an animal killed by animals.”

Beck then made clear a connection between this and his protester prediction and, again, doubled down on them, hitting back at those that would call him crazy. After modifying his old metaphor about being in a car driving the wrong way down a highway, Beck went after his critics.

“I’m really not going to answer the charges anymore that I’m crazy. Because the rest of society seems to be the definition of insanity!”