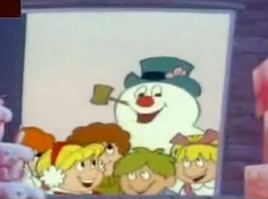 “Frosty the Inappropriate Snowman,” which is available on CBS’ website, mashes up video from the beloved children’s classic with risqué audio from CBS’ How I Met Your Mother and Two and a Half Men. Goldberg described the attempt at viral hitmaking by the erstwhile Tiffany Network as “pathetic:”

From The O’Reilly Factor:

Alternatively, in the words of Time‘s James Poniewozik, “It’s like watching grandpa get a fauxhawk and try to date college girls.” Though Goldberg’s “let’s get jiggy” was a nice touch.