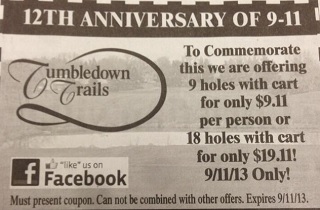 Tomorrow marks the twelfth anniversary of the September 11 terrorist attacks, which means it’s also the time of year when people get angry at other people for not being sufficiently reverent about the occasion. This year, a Wisconsin golf course called Tumbledown Trails has incurred the wrath of social mediaites everywhere with a coupon promotion commemorating the anniversary, a promotion that they’re actually running for the third time this year.

After the ad ran Monday in the Wisconsin State Journal, the golf course’s MyFace page featured a series of increasingly freaked-out posts as the internet swung into Full 9/11 Outrage Mode. First, there was an apology and a promise that employees would honor the special price, but would also “donate the $ difference between our normal rate and the previous price for the day to the 9/11 Memorial.” Angry commenters remained angry.

Then, an attempt at showing that they’re really nice civic-minded folks:

We are a family owned business & proudly support all local charities and have always gave 20% off everyday to all Police, Fire, Emergency, Military, etc. Please accept our apology.

The years since the attacks have not lessened the pain for many Americans, but they have apparently eroded some of their common sense:

News of the offer spread on social media and the golf course’s Facebook page was overrun with negative comments. Owner and general manager Marc Watts said he received death threats and threats to burn down the family-operated public golf course. The sheriff’s department posting a deputy there Tuesday.

Watts said he felt hurt by the reaction, which makes sense when you realize this is the third time they’ve run this deal:

“We’re a little hurt by the fact that people are putting such a negative context on this,” Watts said. “I thought people would appreciate it.”

The promotion actually began two years ago, on the 10th anniversary of the attacks, and until now was warmly received as a way to ensure people never forget the tragedy, Watts said.

This year, after the newspaper ad circulated on social media, Watts said the club’s phone has been ringing off the hook.

The thing is, if you live in Wisconsin, and you own a golf course, maybe this is how you keep 9/11. You probably didn’t watch the buildings come down, or choke on the smoke for weeks, and maybe you think people will forget if you don’t remind them, even in a manner as clueless as this. As outrages go, this pales in comparison to threatening to burn the guy’s golf course down, and kill his family.

It also pales in comparison to a foreign head of state effectively telling Americans “Nice Freedom Tower you got there. Be a shame if anything happened to it.”