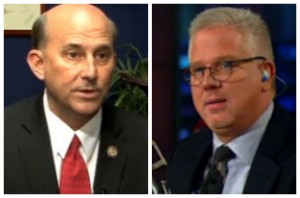 Days after he told WND Radio about the Muslim Brotherhood’s infiltration of the U.S. government, Rep. Louie Gohmert (R-TX) went on Glenn Beck‘s radio show to continue his crusade against the Obama administration. Not only did Gohmert continue to promote his theory about the Muslim Brotherhood, but he also went after Attorney General Eric Holder for spending more time “helping terrorists than defending the country.”

Beck asked Gohmert for his opinion on the federal magistrate judge who came into suspect Dzhokhar Tsarnaev‘s hospital room and read him his Miranda rights while the FBI was apparently questioning him. Gohmert said he still hadn’t received a satisfactory answer on what happened, but that didn’t stop him from speculating. “Think about it,” he told Beck, “when your attorney general spent more of his legal career helping terrorists than defending the country, then you know we all have certain biases and lean certain ways.”

Later in the interview, Gohmert revisited his theory about the Muslim Brotherhood’s “active role” in guiding the policies of the Obama administration, pointing to an Egyptian magazine article, in turn picked up by Beck’s The Blaze, that has made similar claims. “How is it that our intelligence isn’t as intelligent as an Egyptian magazine?” he asked.

Gohmert ultimately summed up the position of Obama administration officials like this: “Either they lie under oath or they do know the extent of Muslim Brotherhood infiltration into our government.”

Listen to the audio below, via Glenn Beck: