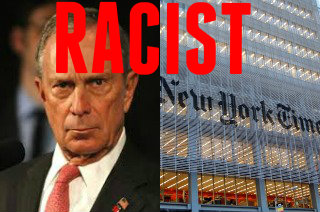 On Tuesday, New York City Mayor Mike Bloomberg fired back at the New York Times for accusing his administration of embracing a racially discriminatory law enforcement policy with his own accusations of racism. After being accused of embracing a the controversial “stop-and-frisk” policy which critics have said unfairly targets minority youth, Bloomberg leveled his own accusations of racial discrimination back at the Times claiming they are feigning interest in the plight of African-Americans.

Bloomberg spoke Tuesday about a March editorial in the New York Times which accuses his administration of unfairly singling out black youth with the “stop-and-frisk program.”

“Last week Bronx resident Alphonza Bryant was shot and killed while standing with friends near his home. He was 17,” Bloomberg said in response. “Like most murder victims, he was a minority.”

“It does not appear that he was even the intended target of the shooters. He was just a victim of too many guns on our streets,” the mayor continued. “But after his murder there was no outrage from the Center for Constitutional Rights or the NYCLU.”

“There was not even a mention of his murder in our paper of record, the New York Times,” Bloomberg noted pointedly. “’All the news that’s fit to print’ did not include the murder of 17-year-old Alphonza Bryant. Do you think that if a white, 17-year-old prep student from Manhattan had been murdered, the Times would have ignored it? Me neither.”