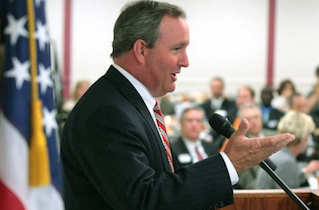 Jeff Duncan, a Republican congressman from South Carolina, recently took to his Facebook page to discuss his opposition to background checks. In elaborating on how the measure would lead to a national registry, Duncan warned of the “evil consequences” — likening in to the Rwandan genocide.

Questioning why the Second Amendment is under attack, Duncan wrote, “Ask yourselves about a National gun registry database and how that might be used and why it is so wanted by progressives.”

Read about the Rwandan genocide, the Hutu and Tutsi tribes. Read that all Tutsi tribe members were required to register their address with the Hutu government and that this database was used to locate Tutsi for slaughter at the hands of the Hutu. (Since the government had the names and addresses of nearly all Tutsis living in Rwanda (remember, each Rwandan had an identity card that labeled them Tutsi, Hutu, or Twa) the killers could go door to door, slaughtering the Tutsis.

Not with firearms, mind you, but with machetes.

This, he said, is the example he uses to “warn that national databases can be used with evil consequences.”

As many others have, Duncan argued that background checks would not have stopped the shootings in Newtown or Aurora — and that our country’s founders expected us to be responsible in playing an active role in protecting ourselves.

“To blame the firearm, or a certain size magazine, or type of ammo” for the tragedies, he wrote, “is like blaming the knife used to kill Nicole Brown Simpson or the machetes used to slaughter a million Tutsis in Rwanda.”

Asked about the appropriateness of invoking genocide in this debate, Duncan’s spokesman, Allen Klump, told POLITICO:

“I think the congressman wrote rather extensively on this topic,” he told POLITICO. “I believe if anyone reads what he wrote in its entirety, it’s absolutely clear he was addressing concerns with a national gun registry. He also makes clear why he used that example.”