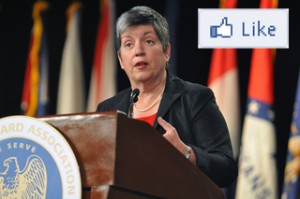 Get ready for something like this: @WhiteHouse – Terror Alert #BeScared

Ok, not really, but the government is planning on employing social media to alert citizens of danger. A 19 page document has been released detailing the new alert system that will be replacing the color code whose retirement was announced last January. The new system will only have two levels, elevated and imminent, and will be sent out only for a limited period of time.

‘The 19-page document, marked ‘for official use only’ and dated April 1, describes the step-by-step process that would occur behind the scenes when the government believes terrorists might be threatening Americans. It describes the sequence of notifying members of Congress, then counterterrorism officials in states and cities and then governors and mayors and, ultimately, the public. It specifies even details about how many minutes U.S. officials can wait before organizing urgent conference calls among themselves to discuss pending threats. It places the Homeland Security secretary, currently Janet Napolitano, in charge of the so-called National Terrorism Advisory System.

The new terror alerts would also be published online using Facebook and Twitter ‘when appropriate,’ the plan said, but only after federal, state and local government leaders have already been notified. The new system is expected to be in place by April 27.”

Unlike the color codes, the new system will be much less vague and the warnings will only go up for the time of the specific concern. No longer will we always be in Orange with occasional dips into Reddish Orange. If something comes up, people in specific areas will be notified that, for a period of time, the threat level is elevated.

This sounds like a good plan and the use of social media seems like a natural step. However, it does bring up an interesting question. If you get a Facebook message telling you your city may be under attack and you want to spread the message to your friends, does that mean you have to “like” it?