Hamilton Is Being Filmed Before Lin-Manuel Miranda Leaves!

Hamilton Is Being Filmed Before Lin-Manuel Miranda Leaves! 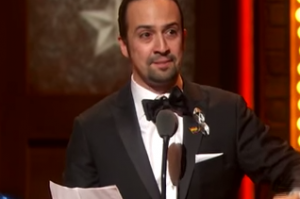 Today, GQ released their lengthy profile of Kim Kardashian West. In it, readers learned that husband Kanye West films everything when he’s in the studio just in case he wants to make a documentary one day. Basically, there is a lot of unseen footage in a vault somewhere that lovers of reality TV, rap, or celebrity culture in general would do anything to get their hands on.

That’s right: Hamilton creator and star Lin-Manuel Miranda has confirmed that though he is leaving the show on July 9, the whole thing is being filmed ahead of his departure. Here’s what USA Today said:

But before he packs up his Hamilton dressing room, the production will film two performances with the original cast this month before they start exiting, as well as shooting offstage cameos.

Miranda tweeted about the footage a little today, too:

1)So far @USATODAY is the only one not burying the lede:
We’re filming the original cast before I go.
WE GOT YOU. https://t.co/O7Vo9LhF7O

2) What are we doing with that footage?
No idea.
Throwing it in a vault at Gringotts for a bit probly. But we’re getting it.

Dang. So it looks like the footage is going West-ward, if you catch my drift, because there are no official plans for it, which means it could be years before it sees the light of day.