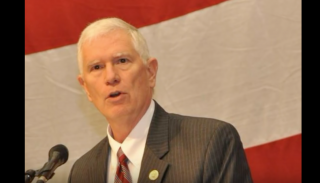 On Thursday, Congressman Mo Brooks (R. Ala) said he believes that the Democrats have a major problem on their hands, and it has to do with two key groups they’re trying to attract.

Efforts to earn the support of the LGBT community and the Muslim community are inherently at odds with one another, according to Congressman Brooks, because the Muslim community “…would kill every homosexual in the United States of America”. His assertion came in a response to a question about why the Democratic party has fallen short of recognizing many of more controversial elements of “mainstream Muslim thought.”

“Well, it’s probably because they’re counting votes. And they’re seeking a block vote from the Muslim community in the United States and that’s a community that’s increasing in political power, as it’s doing in Europe. More and more votes are there. And the Democrats are in a perplexing position. On the one hand, they’re trying to appeal to the gay community, but, on the other hand, they’re trying to also appeal to the Muslim community, which, if it had its way, would kill every homosexual in the United States of America.”

Rep. Brooks made his statement while being interviewed by the radio show Matt and Aunie in Birmingham, Alabama. His comments come in the wake of the Orlando shooting by a Muslim man in a gay nightclub that resulted in the deaths of 49 people.

“It’s pretty clear that the Islamic doctrine says that you are to kill homosexuals where you find them,” Brooks claimed according to Politico.