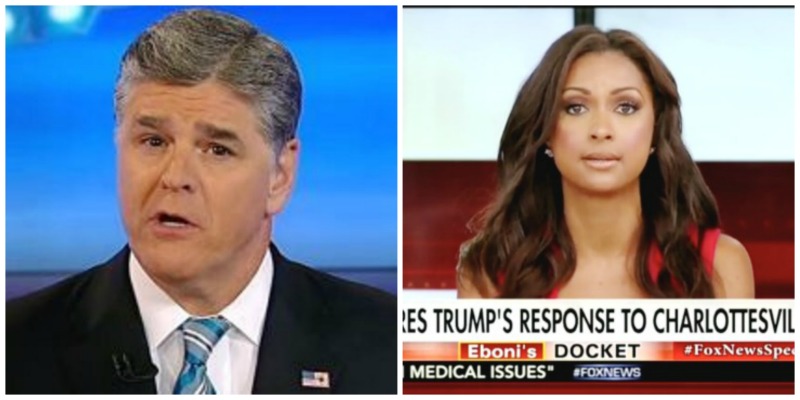 On Monday’s broadcast of The Fox News Specialists, co-host Eboni Williams took some pointed shots at President Donald Trump for saying that the violence in Charlottesville came from “many sides,” calling those comments “cowardly and dangerous.”

It appears that those remarks weren’t well-received by some Fox News viewers. In an interview with Variety, Williams revealed that she had received death threats in response and that they were worrisome enough that she heeded her book publisher’s advice to get additional security.

After the story broke, Fox News host (and fervent Trump supporter) Sean Hannity stood up for his colleague, calling on people to back off Williams.

Eboni is a dear friend! This is a national disgrace that people cannot accept differences. Haters back off all of FNC supports her! https://t.co/ttPjsRJNSH

He also gave her a book plug:

This book is amazing. https://t.co/dUxlAkX8Ku

And when some folks on Twitter went after Williams, saying she shouldn’t have gone after Trump or that she was awful on the show, Hannity continued to defend her:

How about this. In America we can DISAGREE and NOT make death threats, be violent, try to silence opposition. Eboni and I DISAGREE. SO WHAT https://t.co/UsUPqFnIwq

Nancy some people absolutely hate me. My advice to those people is DO NOT WATCH. We get to decide what to watch. Simple, NO THREATS. https://t.co/zO5Tgn51ZL