Harry Reid Blasts ‘Phony’ Scott Brown: ‘One of the Worst’

Harry Reid Blasts ‘Phony’ Scott Brown: ‘One of the Worst’ 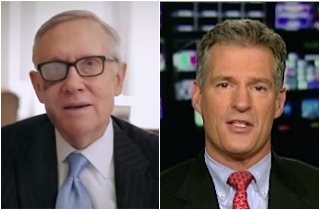 In Ryan Lizza‘s extensive New Yorker profile of Sen. Elizabeth Warren (D-MA), we heard from Sen. Harry Reid (D-NV), who, since announcing he will not seek re-election in 2016, has been going all out against Republicans.

Just a few weeks ago, Reid said he does not regret taking to the Senate floor in 2012 to accuse then-GOP presidential nominee Mitt Romney of not paying his taxes, saying, “he didn’t win, did he?” And as our Tina Nguyen pointed out, Reid basically has nothing to lose, calling all GOP presidential candidates “losers.”

Reid, who became the Senate minority leader when the Republicans took control of the Senate in the 2014 midterm elections, decided this time to go after former Sen. Scott Brown (R-MA, but also sort of NH?). In the Warren profile, Reid praised the progressive senator and called Brown, her opponent in the 2012 election who is now a Fox News contributor, a “phony”:

“Republicans were afraid of her. So what did they do? They said they would block her nomination [to head the Consumer Financial Protection Bureau]. And thank goodness they did. Because after that I worked with Elizabeth and others to see if she would run against Scott Brown, who I thought was one of the worst senators in the history of my being around here. I mean, what a phony. In 2011, we worked hard to get her to run.”

“One of the worst senators in the history of my being around here” is a pretty strong criticism, considering the fact that Reid has been in office since 1987.