Have You Heard the One About the Real-Life Barbie Impersonator?
Opinion
life in plastic, it's fantastic

Have You Heard the One About the Real-Life Barbie Impersonator? 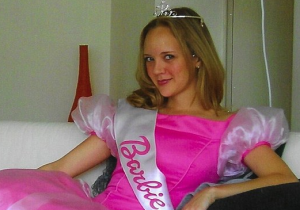 Over at xoJane a few days ago, one of their “It Happened to Me” stories is generating major buzz, as that particular section is prone to doing every few weeks. It’s no hairballs-in-the-vajunk, but “IHTM: I Was Hired by Mattel to Be a Real-Life Barbie” is still pretty compelling.

Reacting to the news that Mattel is rolling out new versions of their ubiquitous doll with more realistic body proportions, Annette Christie, the part-time Barbie, gives some tongue-in-cheek life advice as she imparts her wisdom on how to embody the astronaut/homemaker/doctor/teacher/princess at store openings and capitalistic tea parties.

Homeless women may try to climb under your skirt … If this happens to you, just remember: even as Barbie, you still have boundaries.

On having no tolerance for unwanted harassment:

Dads may say inappropriate things to you. Adorned in pink fabulousness and a Barbie sash, I would stand in Toys “R” Us, hearing things like “Daddy wants a date with Barbie” and “Are you $14.99, too?” At the time, the only in-character response I could come up with was, “Tsk, tsk! Ken would get jealous!” Now, that Barbie has some new bods, I think it’s time for some new attitudes, too. Might I suggest adding a “Hey, I’m not actually made of plastic. Do you really want your daughter to witness you getting punched in the jugular by her favorite doll?” to the giggle about Ken’s jealousy?

On embracing your greatness and not being afraid to prioritize yourself:

… When you spread your wings, watch out for everyone around you. No, wait! Those wings are definitely symbolic. Don’t watch out. Spread those babies and never mind the collateral damage. You’re Barbie, dammit. You’ve got moons to land on and public offices to run for and dates with eunuchs to go on.

She has a pretty great conclusion, too. She writes that while a number of men told her over the years that she didn’t “look like Barbie,” no child ever told her that her face or waist or legs were not right for the gig. Now that Barbie is becoming more conclusive, Christie seems pretty optimistic for the future of the doll, the children who flock to see her at events, and the young women who will portray her.

Her inspirational xoJane piece was picked up by The Daily Mail’s FeMail blog and, inexplicably, Detroit News Times, so it must have struck a chord somewhere.