It Happened Again: Rubio Goes on Fox News to Run ‘It’s on Me’ Subroutine
Opinion

It Happened Again: Rubio Goes on Fox News to Run ‘It’s on Me’ Subroutine 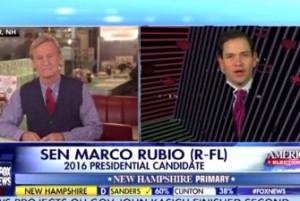 Poor Senator Marco Rubio (R-FL) can’t seem to catch a break these days. First, Chris Christie called him out at Saturday night’s debate for repeating the same rehearsed line over and over again after which Rubio did it again, and then went on TV and kept doing it. The Rubio robot narrative likely cost him a respectable second or third place finish in New Hampshire, a fact that he acknowledged Tuesday night by telling supporters “It’s on me,” and that “this will never happen again.”

Well, it happened again. In an interview with Fox and Friends Wednesday morning, mere seconds after they played a clip of Rubio telling supporters “It’s on me” and it “will never happen again,” guess what Rubio was telling host Steve Doocy:

[Note: Additional video features were added to this video, and were not present when it originally aired on Fox]

I think it had to do with the fact that Saturday night and the last three days and the coverage. So that’s on me. That ain’t ever going to happen again.

Well, at least he thought to run an update on his “blame the media” plugin, that’s an improvement.

Rubio went on to make the point that politicians repeat themselves all the time, which is true, but not like Rubio did, and not after they’ve already been called out for it. Nevertheless, now that Rubio is famous for skipping like a glitchy android, he ought to avoid using any set of three or more words in sequence more than once, at least until this whole campaign thing dies down.