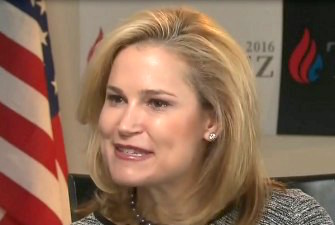 Seeing as how Ted Cruz‘s father Rafael is a preacher and that the candidate has a solid base of evangelical supporters, it shouldn’t come as any surprise that Cruz’s wife Heidi has been lobbying the religious influence while campaigning on her husband’s behalf. During a radio interview, Mrs. Cruz went all in when she promised that the Cruz campaign will show America “the face of God.”

Talking with South Carolina radio host Vince Coakley Wednesday, Cruz noted that even if she weren’t married to the man, his political and faith-based credentials would be reason enough for her to work for his campaign anyway:

Separation of church and state aside, if Cruz does win and shows the nation the face of the Lord, hopefully it will go a little bit better than when he showed his daughter his own face for a kiss. If not that, well, hopefully it won’t go like the face-melting end of Raiders of the Lost Ark.

Listen to the interview with the audio above.