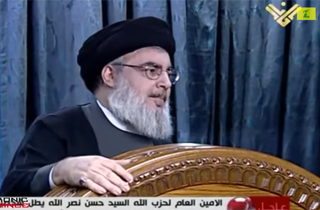 Hezbollah chief Hasan Nasrallah condemned terrorist acts today in a speech in Lebanon, accusing jihadis of apostasy and saying that their actions were more offensve to the prophet Muhammed, than the Western cartoons mocking him.

“The behavior of the takfiri [infidel] groups that claim to follow Islam have distorted Islam, the Quran and the Muslim nation more than Islam’s enemies … who insulted the prophet in films… or drew cartoons of the prophet,” Nasrallah said during a televised speech marking the prophet’s birthday, reports Lebanese paper The Daily Star.

Though he did not mention the Charlie Hebdo massacre specifically, Nasrallah said that Muslims should worry less about offensive cartoons and more about groups such as ISIS and al Qaeda, “who behead and slaughter people,” and who are at war with Hezbollah over Syria. “Takfiris are the biggest threat to Islam, as a religion, [and] as a message,” he added.

The likelihood that Nasrallah is declaring #JeSuisCharlie is slim, however, given his current conflict with ISIS, al Nusra, and al Qaeda, and his desire to paint them as ideological enemies of Islam. As Vox helpfully explains:

Unlike Sunni ISIS and al-Qaeda, which are Sunni Muslim groups, Hezbollah is Shia. But this is more about the geopolitics of Syria and its civil war than about Islam.

Hezbollah’s principal international patron is Iran; both of them are allies of Syrian leader Bashar al-Assad and his Alawite Shia government. As such, Hezbollah soldiers have flowed across the Lebanon-Syria border in large numbers, fighting in support of Assad, which means fighting against ISIS and al-Qaeda.

And indeed, Nasrallah used part of his speech to hit on the jihadi groups, warning Lebansese to resist the “psychological warfare” used by the terrorists at the border (they recently captured 25 Lebanese border patrol guards), and promising a swift victory.

“The militants on the borders have failed to achieve any significant victories on the borders,” he said. “As we have defeated the Israelis, we will defeat the takfiris, the terrorists, and anyone who attacks Lebanon.”