Girlfriend of Charlie Hebdo Editor: ‘He Knew He Would Die’

Girlfriend of Charlie Hebdo Editor: ‘He Knew He Would Die’ 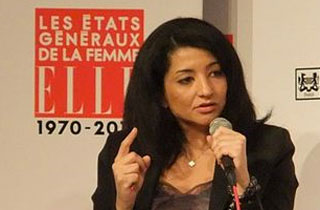 The girlfriend of murdered Charlie Hebdo editor-in-chief Stéphane Charbonnier said in an interview that the two never married or had children, because, in her words, “he knew he would die.”

“I begged him to leave France but he wouldn’t,” 41-year-old Jeannette Bougrab told French television station BMFTV, saying that she knew he would face the same fate as murdered Dutch filmmaker Theo Van Gogh. “My companion is dead because he drew in a newspaper.”

Bougrab, the former French Secretary for Youth and Community Life who served in the Sarkozy administration, said that she discovered that Charbonnier had died when he did not respond to her texts. “‘I was at a state meeting and I learned there had been a shooting,” she said, according to the Daily Mail. “Then I sent him a text, a second text, third text, and then I phoned him and he wasn’t answering and he never did that.”

“[Charbonnier] died standing,” Bougrab added, referring to a statement Charbonnier made years ago. “He died, executed with his comrades, as he would say.”

‘Do you know people capable of dying for their ideas today? No. Because they’ve just died, they’ve just been murdered.

Asked if she had been comforted by the world’s adoption of the ‘Je Suis Charlie’ symbol and that it could be seen as a sign of victory, of hope, Bougrab said passionately: ‘Absolutely not, because he’s dead. It’s absolutely not a victory.

‘It’s a defeat. It’s a tragedy for our country and I refused to rejoice in the idea that people are demonstrating in the streets because they have torn away the precious being who accompanied me in life.’

Bougrab, an ardent secularist, had been living with the famed cartoonist for three years, as well as her adopted daughter.