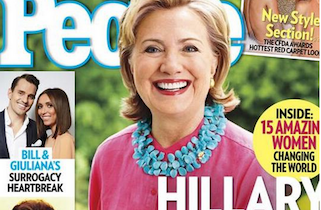 officially drops on June 10, and before she sits down with ABC News’ Diane Sawyer, Fox News’ Bret Baier and Greta Van Susteren and CNN’s Christiane Amanpour, she gave an “exclusive interview” to People magazine.

Below are some highlights from the conversation, including the latest on his presidential campaign plans, her first reaction to the resurgence of Monica Lewinsky, and taking a break to watch TV.

“I know I have a decision to make. But part of what I’ve been thinking about, is everything I’m interested in and everything I enjoy doing – and with the extra added joy of ‘I’m about to become a grandmother,’ I want to live in the moment. At the same time I am concerned about what I see happening in the country and in the world.”

On her decision not to read Lewinsky’s piece in Vanity Fair:

“I think everybody needs to look to the future… I’m not going to comment on what did and didn’t happen.”

On “binge-watching” House of Cards with Bill Clinton:

“[Bill and I] totally binge-watched the first season of House of Cards. [Part of the appeal was] a little bit of the, ‘Oh, my gosh, I can’t believe we can just sit here and do this’ and ‘We’re only going to watch one episode, oh, let’s watch another. Okay, well, we have time, we’re not going anywhere, let’s watch a third.’ I know that sounds kind of devoid of content.”