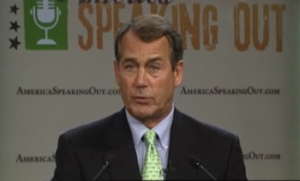 The House Republican Leadership certainly deserves some credit for trying something new. In a further bid to be seen as the party of the people, they announced yesterday that they had created a website called America’s Speaking Out where users can give their opinions on issues that they think Republicans should tackle in their quest to regain control this November. Unfortunately, while the idea is clever and well-intentioned, it’s also a little bit naive. As anyone who has ever been in a message board ever will tell you, the internet is full of crazy people. Lots and lots of crazy people.

In a post earlier today entitled “Republicans’ new Web site not exactly what they hoped it would be”, the Washington Post’s Dana Milbank points out that the comments posted on the site so far have mostly run the gamut all the way from moronic to even more moronic. While some of them are insightful and well thought out, the rest are racist, offensive, and just plain bizarre.

Here are a few samples from when I checked out the “American Values” section of the site earlier today, and sadly I wasn’t cherry-picking:

Yep, consider the country saved. Obviously, many of these are trolls just messing with the site, but how are the administrators going to tell them apart from people who are just, well, crazy. And how are the politicians going to get any real ideas from comments that are nearly entirely like the ones posted here? It’s really too bad because it was kind of a nifty idea and the Republicans had high hopes for it.

“GOP leaders seemed to have something else in mind as they rolled out their new site. ‘I would expect the ideas that come out of this Web site and the involvement of our members will lead to ideas that we can attempt to implement today,’ House Minority Leader John Boehner (Ohio) proclaimed. ‘We want to continue to offer better solutions to address the problems that America is facing, and we see this as a giant step forward, directly engaging the American people in the development of those solutions.'”

Well, it appears the Republicans in the House were a little too optimistic about the kind of discourse one finds on the internet. That’s ok. There are some Democrats in the Senate who don’t even understand ATMs.