How to Watch the Rose Bowl: USC vs. Penn State Live Stream Online 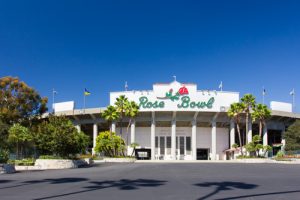 It’s the “Grandaddy of ’em all,” the Rose Bowl. And this year’s edition features a classic Big 10-Pac 12 match up between two of the hottest teams in the country, No. 5 Penn State and No. 9 USC.

Penn State was left on the outside of the College Football Playoff, despite winning the Big 10 and having beaten Ohio State, which ended up making the four team tournament. Still, the Nittany Lions can take solace in their nine consecutive victories to close out the regular season, and their conference title. Now, they’ll try to win their first Rose Bowl since 1995.

Standing in their way are the USC Trojans, which couldn’t possibly fathom it would be in this game after starting the season 1-3. But a switch to redshirt freshman Sam Darnold at quarterback was just what the doctor ordered, and the Trojans reeled off eight straight victories to close out the year. Darnold looks like a surefire No. 1 overall draft pick, perhaps the best prospect at the position since Andrew Luck. The good news for USC is that they’ve got him for at least one more season. A Rose Bowl win would give Darnold and his squad excellent momentum for what they hope will be a 2017 National Championship run.

Kickoff for the game is 5:00 p.m. ET. Chris Fowler and Kirk Herbstreit will call the action. The game will air live on ESPN. It will also be streamed online, via WatchESPN, free with a cable subscription. The Watch ESPN app can be downloaded from the iTunes, the Google Play store, and the Windows store.