If At First You Don’t Succeed, Pretend You Did Anyway: Joe Klein’s Lame Non-Apology For Insulting Atheists
column

If At First You Don’t Succeed, Pretend You Did Anyway: Joe Klein’s Lame Non-Apology For Insulting Atheists 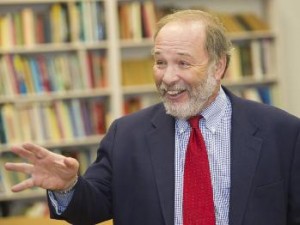 As I reported yesterday, TIME writer Joe Klein had a great cover story on public service that was otherwise marred by his obnoxious insult to atheists for not being as kind and charitable to others as religious groups. Well, Klein heard the peasants crying out from the grounds below, and decided to issue a proclamation explaining why he thought it appropriate to take a potshot at a certain group of people in an article about community and togetherness. At no point does Klein say he’s sorry for the insult; in fact, he insists that we’ve all misinterpreted him because he’s a secular humanist too, so it’s totally okay for him to say that!

Before we get to Klein’s unrelenting dickishness, I need to get one little pet peeve out of the way. Klein says he identifies as a secular humanist because he rejects “the scientific certitude of atheists, and… the spiritual certitude of the religious.” No. Being an atheist does NOT mean you absolutely 100% without question believe that there is no god. The phrase “an agnostic” is a silly one, because practically no one on the fence about this thinks of God’s existence or non-existence as equally possible likelihoods. There are obviously people on the extremes of both sides that believe their position and cannot be dissuaded no matter what. Everybody else is merely a different shade of agnostic (meaning a lack of absolute certainty), whether they be on the theistic or atheistic side. Klein can believe or not believe what he likes, but he shouldn’t be grossly misrepresenting the beliefs or views of other groups.

Whew. Okay, let’s get back to the cover story.

Here’s how Klein first attempts to defend himself.

There is, I know, something mealy-mouthed and uncommitted about my squishy spirituality. And that is part of what I was thinking about when I made the observation about organized groups of secular humanists not being present in disaster zones. As a society, we’ve lost a good deal of our sense of communitarian commitment… But the churches… still have it. Many of their teachings are improbably literal and sometimes close-minded to the point of ugliness; but the church groups are always out there, in droves, when a disaster happens.

Because there are a shit ton of them. A Pew poll from last year found that 73 percent of the population is Christian, and roughly 20 percent is religiously unaffiliated. 85 percent of the people in Oklahoma, the state Klein was in for his article, identify as Christian. And what about the fact that there are many states with institutional biases and restrictions against non-believers? I’m not saying Klein is wrong to praise church groups for the good works they do, but he is ignoring facts and circumstances that blatantly contradict his argument.

Because when he says that secular humanist groups aren’t appearing at disaster sites like religious ones are, he assumes all things are equal, and that is a ridiculous assumption to make. Non-believers are in the minority, that’s why there are much fewer groups on their side. So it’s adding insult to injury when Klein sticks the knife in and taunts, “Why don’t you organize as well as religious groups? Huh? HUH?!”

There was a time when secular service organizations had a greater sway in this country and, no doubt, a greater presence when disaster struck. But that’s not true now–although, it is certainly true, as my critics point out, that secular humanists, including atheists, can be incredibly generous. I never meant to imply they weren’t. But they are not organized.

I know we’re going heavy on the italics today, but yes they are, goddammit. One of the many ways Klein’s snarky point was rebutted was with lists of secular groups that provided much-needed aid in the wake of Oklahoma. So I’m going to go ahead and re-post the same statistics from the Friendly Atheist blog I did yesterday, and if you happen to see Joe Klein while strolling through the park one day, please make him read this.

It’s right there! He is factually incorrect, and he doesn’t care! What is it about pundits like Klein these days who are never wrong, they’re just misunderstood and us stupid people didn’t grasp the point they were trying to make? What’s wrong with saying “Okay, look, I probably shouldn’t have said that, my bad”? Just one sentence like that and this can all be done with. It’s his own fault that this important piece on public service and people taking care of each other was overshadowed by Joe Klein deciding to be an asshole.