American Seniors Association Accused Of Being A Conservative Front 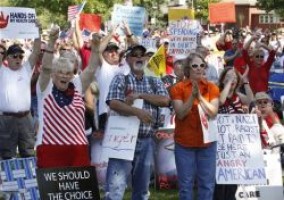 In August, the month the health care debate gave way to disrupted town hall meetings and “death panels,” the AARP dug its heels into the ground and refused to withdraw its support for the public option. At about that time, trend stories began to emerge from Fox, CBS, and others about how “thousands” were leaving the AARP and an anti-public option competitor, the American Seniors Association (ASA) was gaining ground. Now, a liberal blog accuses the ASA of being a “conservative front:”

In a detailed investigation, liberal blog and news aggregator Raw Story dug through news reports and incorporation papers to find connections between the ASA and conservative causes. The group’s founder, Jerry Barton, was previously an executive at an auto parts company that sponsored Glenn Beck, and one of the ASA’s major supporting organizations, the conservative think tank Institute for Liberty, has further ties to the Tea Party and 9/12 movements.

For this, The Raw Story accuses the ASA of being an “Astroturf” organization: (emphases added)

ASA isn’t the first organization that has presented itself as a conservative alternative to the AARP, while actually being invested in promoting right-wing corporate causes with little connection to seniors’ interests. A very similar group, the United Seniors Association, gained notoriety in 2002 by serving as a front for the pharmaceutical industry and also lending its support to Bush administration energy policies and a telecommunications issue important to AT&T.

Throughout this year’s health reform debate, various members of the media have exposed similar “Astroturf” groups like FreedomWorks and Conservatives for Patients’ Rights, which, like ASA, say they’re standing up for regular people but in reality are organized by a narrow and influential group of elites.

Here’s the thing: the ASA is upfront about its political leanings, and so the bait-and-switch charge rings false. Its website announces that it’s a “conservative alternative to the AARP” — in fact, its 160-character Google result announces the same thing.

Partisanship aside, Raw Story’s real beef here should be with Fox News and especially with CBS, which presented the group as a “serious competitor to the AARP” (and not just ideologically) despite its miniscule membership of 40,000-odd people versus the AARP’s membership of 35 million. False balance, anyone?

(via Raw Story. image via Examiner)