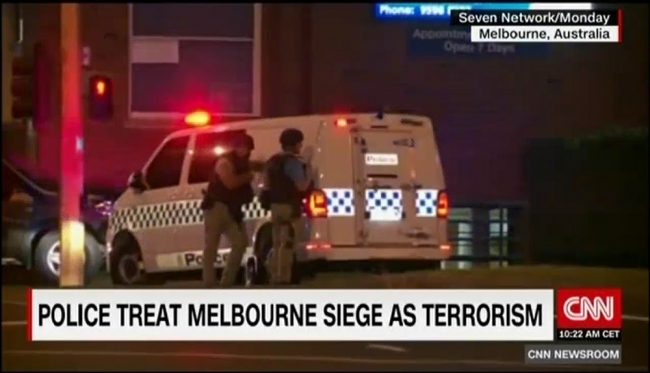 ISIS has claimed responsibility for an incident on Monday near Melbourne, Australia where a gunman killed one and took a woman hostage for hours before being killed by police. Three police officers were also injured during the standoff.

Reuters detailed the suspected terrorist attack in a Tuesday report. The alleged terrorist, Yacqub Khayre, had been acquitted of assisting in a 2009 plot to attack an Australian army base in Sydney. Three other men were convicted in that case.

According to the wire agency, “court documents show Khayre migrated as a child with his family to Australia through a Kenyan refugee camp. He was recognized as a refugee under Australia’s humanitarian migration program and later became a citizen, police said.”

After his acquittal in the 2009 case, Khayre had been “jailed in 2012 over a violent burglary in Melbourne, where he was found to have repeatedly struck a woman and her father. Khayre was given a five-and-a-half year prison term, according to court documents. He was granted parole in December.”

The Reuters write-up detailed that the alleged ISIS associate “arranged to meet a female escort at a block of serviced apartments in the beachside Melbourne suburb of Brighton on Monday.” When Khayre met up with the woman, he killed an employee of the apartments; and then “held the woman hostage for several hours before he burst out of the building and engaged police in a firefight, during which he was killed.”

The news outlet also disclosed that Amaq, the press arm of ISIS, claimed that “the attack was launched because of Australia’s membership of a U.S.-led coalition fighting against the militants in Syria and Iraq.”