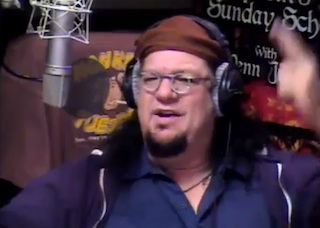 Humorist, Libertarian commentator, and “the one who talks,” Penn Jillette, launched into an epic rant about what he saw as President Obama and his administration’s hypocritical views on marijuana laws in the country.

Speaking on his podcast Penn’s Sunday School the other day, Jillette pointed out how ridiculous it is that medical marijuana is completely legal in California but that you can still get busted by federal police. Basically, the color of the cop’s uniform determines whether or not a person is breaking the law. Jillette said this was proof that “states’ rights don’t mean jack shit” to Obama except when you’re talking about gay marriage.

To further illustrate his point, Jillette pointed out that Obama has made it clear that he used drugs in his past, and asked aloud if the President’s life would have been any better if he had been busted under his own laws.

Amen! Our drug laws in this nation are absolutely insane! This is a serious problem! We need to find a candidate who will give it the concentration it deserves! Maybe the other guy will…oh, wait.