‘Jesus Made Me This Way’: Gay Woman Pays for Meal of Family ‘Disgusted’ by Gay Relative
Video

‘Jesus Made Me This Way’: Gay Woman Pays for Meal of Family ‘Disgusted’ by Gay Relative 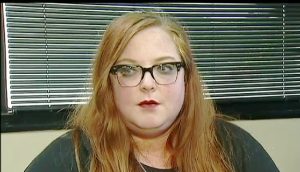 A woman in Texas decided to respond to overhearing a nearby conversation in a diner that he felt was cruel by taking the advice of First Lady Michelle Obama — “when they go low, we go high.”

Natalie Elle Woods of Denton was eating at a restaurant when the family sitting behind her began speaking about a relative who is gay and liberal.

Woods, who is a gay woman, stated that after the man at the table described how he was “disgusted,” other members of the family said they would pray to Jesus to cure the relative.

Speaking to Fox 32, Woods brought up Mrs. Obama as she pointed out that she paid for the family’s meal, saying that when someone acts like a bully, “you don’t stoop to their level.”

“I asked our waitress for their check, and she brought it over. I paid it,” she said.

When the waitress gave Woods the receipt to sign, she wrote on it, “Happy Holidays from the very gay, very liberal table sitting next to you. Jesus made me this way. P.S. – Be accepting of you family.” Before giving the receipt back to the waitress to give to the family, Woods snapped a photo of it.

Woods stated later that she told her friend about the incident, who convinced her to post the receipt to social media. Since then, the post has been shared thousands of times. 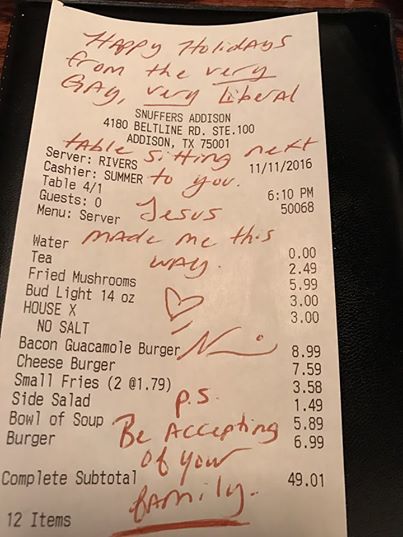 Watch the video above, via Fox 32.