Joe Miller: If East Germany Could Secure Their Border So Can America!
audio

Joe Miller: If East Germany Could Secure Their Border So Can America! 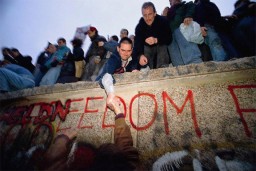 Before his security detail handcuffed a reporter to a chair following a town hall event in Alaska over the weekend, Senate candidate Joe Miller told the audience at his event that if “East Germany” could secure their border during the Cold War than the U.S. should be able to stem illegal immigration from Mexico.

“East Germany was very, very able to reduce the flow…Now, obviously, other things there were involved. We have the capacity to, as a great nation, obviously to secure our border. If East Germany could do, we could it.”

Indeed. Let’s consider those “other things that were involved.” Presumably what Miller was referring to (he once served at the Fulda Gap, a point on the former East-West German border) is the fact East Germany, at the time under stifling communist rule, secured “its border” with a little help from its Soviet occupiers, who overnight shut down the border and erected of parts the Berlin Wall, trapping unsuspecting folk on either side and dividing families from each other for decades. Or maybe he was merely noting that the Wall, itself, was not constructed to keep illegal aliens out of East Germany but to keep East Germans from escaping their own country (West Berliners could travel to East Berlin, but not vice versa…border guards had orders to shoot to kill and nearly two hundred people died trying to cross).

Other than these minor points I think we can all agree the East German border is an immigration standard everyone should aspire to. Not really. What I actually think is that fact-checking this midterm election cycle is proving to be, if nothing else, strangely educational. Audio below.