John Sununu: Was Bill Referring to Hillary When He Said ‘I Did Not Have Sex With That Woman?’
video

John Sununu: Was Bill Referring to Hillary When He Said ‘I Did Not Have Sex With That Woman?’ 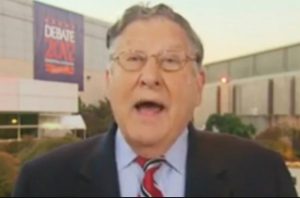 Former New Hampshire governor John Sununu opened up for Donald Trump at a rally today, and he decided to begin by taking a shot at the sex lives of Bill and Hillary Clinton.

Former senator Bob Smith was on stage before Sununu, and part of his speech involved him doing an impression of the former president saying he actually wants Trump to beat his wife for the White House. “If she goes to jail, I’m going to be free as a bird to do whatever I want to do,” Smith said in Clinton’s voice.

Sununu took the stage soon afterwards, and he decided to follow-up on Smith’s impression. “Do you think Bill was referring to Hillary when he said, ‘I did not have sex with that woman?’” Sununu asked the crowd.

Sununu chuckled along with the audience before saying that Smith made him do it before he got on stage.

Smith and Sununu’s words appeared to reference Bill Clinton’s affair with Monica Lewinsky, which he denied on television in 1998. Trump has made a point of bringing up the former president’s sexual misconduct in order to attack his wife in their battle for the presidency.

As Sununu talked up Trump while bashing the mogul’s political enemies, his speech entailed several highlights picked up by the media. One moment involved Sununu ripping Elizabeth Warren, which was met by some audience members doing war whoops to mock the senator’s questionable Native American ancestry. Another moment that drew intrigue was when Sununu had to scold an audience member who shouted that Mrs. Clinton should be executed.