Jon Stewart to Wyatt Cenac: 'F*ck Off. I’m Done With You.'

Jon Stewart to Wyatt Cenac: ‘F*ck Off. I’m Done With You.’ 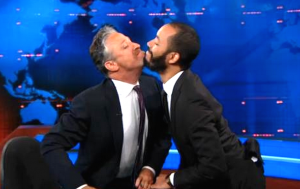 You remember Wyatt Cenac, don’t you? The stand-up comedian served as a writer and occasional correspondent on The Daily Show from 2008 to 2011, and while that might automatically endear him to most fans of Jon Stewart, Cenac doesn’t necessarily feel the same way. At least, that’s the gist of what he told Marc Maron on the WTF with Marc Maron podcast this week.

As Vulture reports, when Maron asked Cenac whether or not he and Jon “got along,” the comedian responded lackadaisically with a simple “naw.” Turns out, Stewart launched into a tirade against Cenac during a writer’s meeting.

Cenac, the lone African-American on the show’s writing staff, wasn’t comfortable with a “voice” Stewart had done previously, in which he imitated then-GOP presidential candidate Herman Cain. “I wasn’t here when it all happened,” notes Cenac. “I was in a hotel. And I cringed a little bit. It bothered me.” In response, Stewart — who was taking flak from Fox News for the botched impression — exploded:

“[Stewart] got incredibly defensive. I remember he was like, What are you trying to say? There’s a tone in your voice. I was like, ‘There’s no tone. It bothered me’ … And then he got upset. And he stood up and he was just like, ‘Fuck off. I’m done with you.’ And he just started screaming that to me. And he screamed it a few times. ‘Fuck off! I’m done with you.’ And he stormed out. And I didn’t know if I had been fired.”

For a taste of what once was, check out the clip of Cenac’s first appearance as a correspondent on The Daily Show, courtesy of Comedy Central: